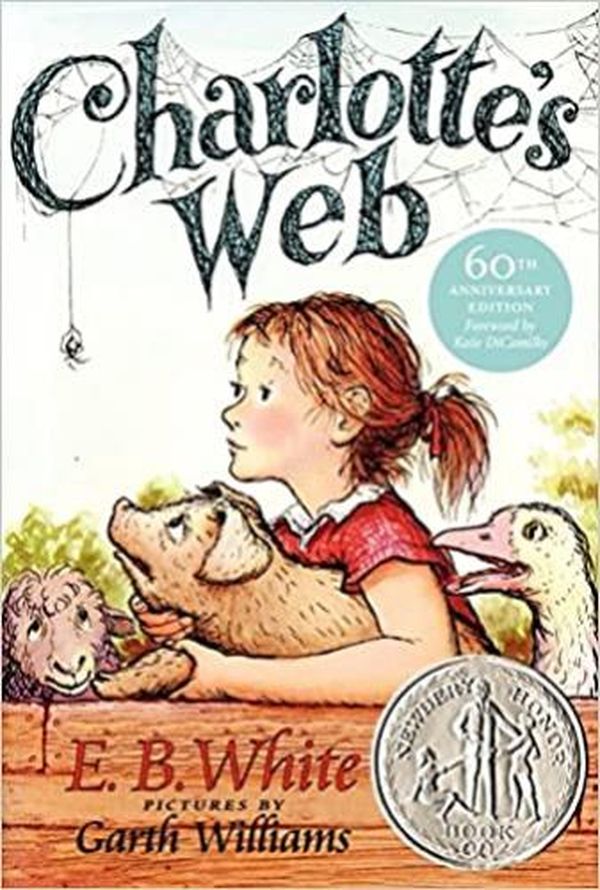 Charlotte’s Web, E. B. White’s 1952 children’s novel, is the story of a little girl named Fern, her pig, Wilbur, and Wilbur’s friend, a spider named Charlotte.

Fern Arable is eight years old. She lives on a farm with her mother, father, and brother, Avery.

One morning, when Fern learns that her father is about to “do away with” a runt pig that had been born during the night, she is horrified. She runs after him and begs him to not kill the pig.

Mr. Arable relents. “All right,” he says, “you go back to the house and I will bring the runt when I come in. I’ll let you start it on a bottle, like a baby. Then you’ll see what trouble a pig can be.”

But Fern never grew tired of caring for him. She named him Wilbur, and loved him with all her heart. She warmed his milk, and held him as he drank from his bottle.

For the first couple of weeks, he was allowed to stay in a box by the stove in the kitchen. When the weather got warmer, Mr. Arable fixed a small pen for him under an apple tree, and made him a little house with straw in it to keep him warm at night. 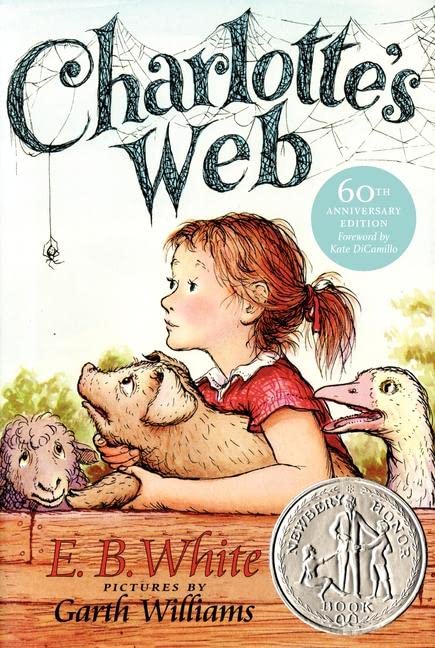 When Wilbur is five weeks old, his future is again in jeopardy. Mr. Arable says Wilbur is now big enough to sell, and that he has to go. Fern cries and cries, but her father stands firm.

This time it’s her mother that comes up with a possible solution. “Call up the Zuckermans,” she tells Fern, “your Uncle Homer sometimes raises a pig. And if Wilbur goes there to live, you can walk down the road and visit him as often as you like.” And so it’s arranged. Wilbur goes to live in the big barn at the Zuckermans.

Fern sees him nearly every day. But Uncle Homer doesn’t allow her to take Wilbur out of the pen, and he won’t let her get in the pen with him. So she sits on a stool just outside of it. Uncle Homer says she can stay there and watch Wilbur as long as she wants.

She’s happy just to be near him, and Wilbur is happy to know she’s there, but he’s not having any fun. He doesn’t get to go anywhere. He’s lonely. Until, one day, the other farm animals begin talking to him. And he meets Charlotte, who becomes his friend.

Charlotte’s Web is the story of how she comes up with a plan to save Wilbur when his life is threatened for the third time.

In the last days of her life, she finds a way to make it possible for Wilbur to live a long and happy one. He is able to save her many children, and three of them stay in the barn with him. Now he has three friends

One thing that not many people may know about Charlotte’s Web is that the book was actually based on a true story. The book’s author, E.B. White, had a pig named Wilbur, who was saved from being slaughtered by a spider named Charlotte. White was inspired to write the book after observing the relationship between Wilbur and Charlotte, and he used this experience as the basis for the story of Charlotte’s Web.

In 2006, a group of people in a Kansas school district claimed that talking animals were unnatural or blasphemous. They thought that showing lower life forms with human abilities was sacrilegious and disrespectful to God.

They also thought that a dying spider was inappropriate in a children’s book.

Charlotte’s Web is a classic children’s novel written by E.B. White and first published in 1952. The book has captivated readers of all ages for decades with its heartwarming story of friendship and loyalty. However, despite its popularity, Charlotte’s Web has been banned in some schools and libraries. In this article, we will explore the reasons why this classic novel has been banned and if the controversy is justified. We will also examine the themes and messages presented in the book and its literary merit.

Reasons for the Ban

One of the main objections raised against Charlotte’s Web is its depiction of the treatment of animals. The book portrays the process of raising and killing pigs for food, which some people argue is inappropriate for young readers. However, it’s important to note that the book also depicts the strong bond between humans and animals and it has a strong message about empathy and compassion. Another reason for the ban is the use of the word “stupid” in the book to describe one of the characters. Some argue that this word is offensive and should not be used in literature for children.

It’s worth noting that Charlotte’s Web is not the only book to be banned for these reasons. Other classic children’s books such as “Animal of Farthing Wood” and “The Giving Tree” have also been banned for similar reasons.

Themes and Messages in the Book

Despite the objections raised against it, Charlotte’s Web is considered to be a classic piece of children’s literature. The book has been praised for its strong characterization, well-crafted plot, and beautiful writing. Additionally, the book presents important themes and messages, such as the value of friendship, the importance of loyalty, and the power of words.

The book also deals with the themes of life and death and the Circle of Life. It is an excellent representation of the natural cycle of life and death, and it shows how everything is connected.

A common misconception about Charlotte’s Web is that it is only a children’s book and that it only appeals to a young audience. While the book is certainly a classic of children’s literature, it also deals with themes and ideas that are relevant to adults. The story of Wilbur the pig and his friendship with the spider Charlotte is a heart-warming tale that has universal appeal.

One of the most iconic quotes from the novel is “It is not often that someone comes along who is a true friend and a good writer. Charlotte was both.” This quote perfectly encapsulates the friendship between Wilbur and Charlotte, and highlights the importance of having a friend who is both kind and wise.

Another memorable quote from the novel is “Why did you do all this for me?’ he asked. ‘I don’t deserve it. I’ve never done anything for you.’ ‘You have been my friend,’ replied Charlotte. ‘That in itself is a tremendous thing.” This quote highlights the true meaning of friendship, and shows that sometimes, just being there for someone is enough.

“You have been my friend,’ replied Charlotte. ‘That in itself is a tremendous thing.” This quote is a great reminder to appreciate the people in our lives who have been our friends, as friendship is a true treasure in life and something that should be cherished.

In conclusion, “Charlotte’s Web” is filled with quotes that will stay with you long after you’ve finished reading the novel. These quotes serve as a reminder of the importance of friendship, love, and sacrifice, and will leave you feeling uplifted and inspired. So, if you haven’t read this classic yet, go ahead and give it a read, you won’t regret it.

What is the moral of Charlotte’s Web?

One of the key moral of the novel is the value of life. Through Wilbur’s experiences and Charlotte’s selfless actions, the novel teaches readers that every living being has value and should be treated with respect and kindness. This is a powerful message that resonates with readers of all ages, and serves as a reminder that everyone has the potential to make a difference in the world.

Another moral of the novel is the importance of friendship. The novel explores the bond between Wilbur and Charlotte, and shows how friends can help us navigate the ups and downs of life. It also highlights how friendship can make us better people, and how friends can be there for us even when we don’t deserve it.

Another important moral of the story is the power of sacrifice. Charlotte, the spider, sacrifices her own life to save Wilbur, the pig. This teaches the readers that the true love and friendship is about selflessness and the willingness to give up something for the ones we care about.

In conclusion, “Charlotte’s Web” is a novel that is full of morals and lessons that will stay with readers long after they’ve finished reading. Its powerful message of the value of life, the importance of friendship and the power of sacrifice, make it a must-read for anyone looking for a heartwarming and thought-provoking novel. And if you haven’t read it yet, it’s time to make up for it!

Q: Is Charlotte’s Web banned in schools? A: Charlotte’s Web has been banned in some schools and libraries due to its depiction of animals and the use of the word “stupid” to describe the main character, Wilbur the pig. Some educators and parents believe that the book is not appropriate for young children and that it may promote negative stereotypes of farm animals.

Q: Is Charlotte’s Web banned because of its depiction of animals? A: Some people have argued that the book promotes the idea that animals are inferior to humans and that they are only valuable for their use to humans. This has led to the book being banned in some places.

Q: Is Charlotte’s Web banned because of its language? A: The use of the word “stupid” to describe Wilbur the pig has led to some people calling for the book to be banned. Some believe that the word is not appropriate for young children and may promote negative stereotypes of farm animals.

In conclusion, while some objections have been raised against Charlotte’s Web, it is important to consider the literary merit of the book and the themes and messages presented in it. The book depicts the bond between humans and animals and the circle of life, it also has a strong message about empathy and compassion.

It’s worth noting that many other classic children’s books have been banned for similar reasons, and it’s important to consider the context of the book and the time in which it was written.