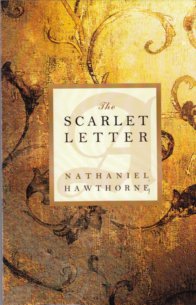 The Scarlet Letter, published in 1850, is considered to be Nathaniel Hawthorne's most famous work.

It is the story of young Hester Prynne, who must wear her "badge of shame" for all to see.  She is pregnant.

She is married, but her husband had sent her ahead to America, while he finished settling his affairs in Europe.  He never arrived and is presumed lost at sea. So everyone knows the father has to be someone other than her husband.

Hester has been imprisoned for her sin, and on the day she is released, she is wearing the letter "A", (for adultery) made from scarlet cloth, on her breast.

She is led to the town scaffold, and stands there holding her baby daughter, while the men of the town say what they will to her  and about her, but she refuses to name the father of her child - the minister - who is condemning her as well.

On this very day, a stranger appears in the crowd. A stranger, that is, to everyone except Hester.  It is her husband, calling himself by another name, and asking her to not reveal his identity.  Now she has two secrets to keep.

She wears her shame, exposed to everyone who sees her, but she does not disclose the identity of her husband or of her lover.

This is the story of how these three lives, as well as the child's, are affected by the secrets, the lies, and the guilt that goes with it.

This story is controversial because of Hester's adulterous affair and the resulting pregnancy.  It has been challenged on sexual grounds, and has been called "pornographic" and "obscene".

It should be noted that there is no sex at all in the book, and no sexual language.  The only way we know she's had sex with anyone is because she has a child.

The Scarlet Letter shows the devastation caused by the self-righteous judgment of church congregations, and corruption in leadership.  All in the name of God, of course.

Sounds familiar, doesn't it? As I read, I was reminded of several church scandals in recent times.  Have some things changed so little in 160 years?  It would seem so.

Return from The Scarlet Letter to favorite-banned-books.com