Symbologist Robert Langdon is in France to give a lecture on Pagan symbolism at The American University of Paris.

He is asleep in a hotel when an urgent middle-of-the-night phone call informs him that he has an important guest on the way to his room.

Lieutenant Collet arrives with a photo of the now deceased Jaques Sauniere, who has just been murdered inside the Louvre.

Langdon had been scheduled to meet with the esteemed curator after the lecture, but Sauniere had failed to show.

Now Langdon is going to the Louvre to view the body.  It is there that he meets Sophie Neveu, a French cryptologist, who soon tells Langdon that he is in great danger.

She also says that Jacques Souniere is her grandfather.

From there, Robert Langdon and Sophie Neveu take us on a heart-pounding journey with twists and turns and riddles that lead to a surprise ending.

This book is very upsetting to many religious leaders, as it tells quite a different story about the life of Jesus.  It was banned in Lebanon after complaints from Catholic leaders, stating that the content of the book is insulting.

Muslims joined Christians in attacks on The Da Vinci Code.  Muslim groups and clerics in Mumbai demanded the movie be banned in India, stating that it's an insult to Jesus Christ.

They added that it is blasphemous to say The Prophet Jesus Christ was married, and that the idea that Jesus had a child "will not be tolerated by any Muslim". 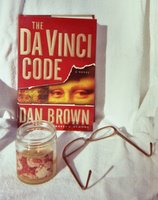 I love this book!  However, I can certainly understand why church leaders are so bothered by it.  The very idea that the life of Jesus may not have been what they have held to be true for centuries is threatening.

Even though the book is fiction, it could cause people to wonder if what they've been taught is exactly the way it was.  Could there be more to this story? Could some - or all - of what they believe be wrong?

Frankly, I find the story told in The Da Vinci Code as - or more - believable than most things I've heard in church.

Perhaps that's the problem. Maybe the church is afraid that a whole lot of people would find it more believable.

Back to Angels & Demons

Back to Books about Religion


Return from The Da Vinci Code to favorite-banned-books.com