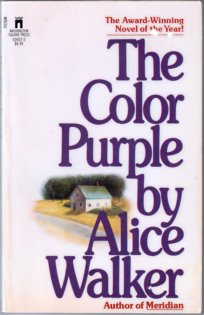 The Color Purple by Alice Walker, published in 1982, is told in a series of letters.  It won the 1983 Pulitzer Prize for Fiction and The National Book Award for Fiction.

The  story begins in the early 1900s in rural Georgia, and covers about 30 years.

The first two sentences in the book are, "You better not never tell nobody but God. It'd kill your mammy".

Then begins fourteen-year-old Celie's letters to God. She tells him she's always been a good girl, and asks for a sign to let her know what is happening to her.

As she tells her story to God, we learn that she is raped repeatedly by the man she believes to be her father. She has had two babies by him, a girl and a boy.  Both babies were taken from her shortly after birth, and Celie believes that her her "Pa" killed the first one, and maybe sold the second one.

Celie's mother asks who the father of the first one is. Celie tells her it's God. Her mother dies before the second baby is born. Celie begins to worry about her younger sister, Nettie, when she sees Pa's growing interest in her.  An older man with four children, whose wife is dead, wants to marry her, but Pa won't hear of it. He offers Celie instead, and a cow to go along with her if the man will agree to take her.

It takes him a few months to make up his mind, but he finally decides he will take Celie. They marry, and she puts up with his bad treatment of her without complaint.

In her letters, she refers to him as "Mr.___", and it's not until Shug Avery, his longtime love, comes to town that we learn his name is Albert.

Nettie escapes Pa and comes to stay with Celie and Mr.___.  That doesn't last, as Nettie is in as much danger with Mr.___ as she was with her Pa.

As Nettie leaves, Celie tells her to go to the home of the "Reverend Mr.___" and his wife for help.

Once when Celie had been in town, she had seen a little girl who was about the age her daughter. She looked so much like Celie and her Pa, that she had followed the girl and her mother into a store and began a conversation to try to find out what she could.

The woman is the the Reverend's wife. Celie now believes that maybe the little girl is hers, and that Pa had sold both her children.

Nettie promises to write, but when time passes and no letters come, Celie begins to think Nettie must be dead.

Shug Avery becomes very ill, and Mr.___ brings her home to care for her. Celie can hardly believe the change in Mr.__'s behavior in Shug's presence.

It is generally believed that men are the boss and women do as they say, and Celie has always gone along with it.

That was not the case with Shug Avery. Her men, husband or not, (or in this case, someone else's husband) did what she wanted.

Sophia was the only other woman Celie knew who had stood up to a man, and she had paid dearly for it. Sophia was the wife of Harpo, Mr.___'s oldest son, who was always trying to figure out how to "make Sophia mind".

Celie is half in love with Shug herself, right from the beginning. Shug is hateful to Celie at first, for which she later apologizes. They become good friends, and then lovers.

Celie tells Shug about Nettie, and about years and years passing with no word from her, and that she thinks she must be dead.

Shug hasn't had much to do with Mr.___ since she found out he beats Celie. But now she is getting real friendly with him again.

Celie is hurt and jealous, and feels abandoned by Shug. But a few days later, Shug comes to Celie and places a letter from Nettie in her hand. They find the rest of Nettie's letters in Mr.___'s old trunk.

Celie stops writing to God, and writes to Nettie instead. The remainder of the book consists of Celie's and Nettie's letters to each other.

The Color Purple has plenty of critics. It's often targeted by censors for its "troubling ideas about race relations", "man's relationship to God", African history, human sexuality, extreme and graphic violence, offensive language, and "unsuited to age group".

It was made into a movie by the same name in 1985, staring Whoopi Goldberg as Celie, Danny Glover as Mr.___, Margaret Avery as Shug, and Oprah Winfrey as Sophia.

I've seen it at least five times! Both movie and book are great. The Color Purple will make you cry, and laugh, and cry some more.

Back to Banned Books


Return from The Color Purple to favorite-banned-books.com