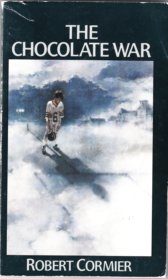 The Chocolate War, a young adult novel by Robert Cormier, was published in 1974.  It is the story of Jerry Renault, a freshman at Trinity, a private Catholic school.

A secret society of students who call themselves the Vigils holds no small amount of influence within the school - and control over the other boys.

The leader of the group is John Carter, a star boxer, but it's the manipulative Archie Costello who has the most influence over the group.

It's Archie who hands out "assignments" to his fellow classmates.  Sometimes these assignments are destructive and cruel, sometimes just plain silly, but all are demonstrations of power, and not to be disobeyed.

The teachers are aware of what is going on, but do nothing about it. In fact, some of them are also influenced by the Vigils.

The book begins with Jerry trying out for football, and soon after, gets his first assignment, having to do with a fundraiser that involves selling boxes of chocolates.

One of the teachers, Brother Leon, who is known to be accepting of the Vigils, is in charge of the chocolate sale.  This year, they have twice the amount of chocolates to sell, and the price per box has doubled.

Brother Leon turns to the group to ensure that every box is sold.

This  is the story of what happens to Jerry Renault when he gets his assignment from the Vigils, and refuses to do as he is told.

From the time of publication, The Chocolate War has been fiercely criticized. Although some have argued that it's one of the best young adult novels, it's a frequent target of censors.

Complaints include the usual: sexual content and violence, along with "pessimistic portrayal of life".  Some disapproved of the idea of a high school's secret society using intimidation.

Once again, I have to wonder why people focus so much on one or two scenes they find distasteful, or count the number of swear words (yes, one parent was reported to have done that!) and miss the chance to have discussions about some very important matters.

This book offers a great opportunity to have conversations about abuse of power, bullying, and mistreatment of students by both peers and faculty.

Return from The Chocolate War to favorite-banned-books.com