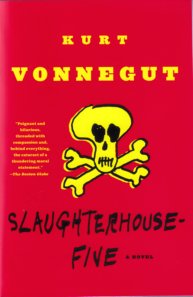 Slaughterhouse-Five, by Kurt Vonnegut, published in the United States in 1969, is the story of Billy Pilgrim.

In the beginning of the book, the author tells us that when he got home from the Second World War, twenty-three years earlier, he had thought it would be easy to write about the destruction of Dresdon.  He would simply write what he had seen.  It turned out it wasn't so easy for him after all. He needed help remembering enough for a book.

He finds, and visits, an old war buddy, Bernard V. O'Hare, and together they travel to Dresdon.  That trip, along with his experiences in the war gave him the material he needed.

The protagonist of the story, Billy Pilgrim, was born in Ilium, New York, in 1922.  He was fresh out of high school, and had attended only one semester at the Ilium School of Optometry, he was drafted for duty in the Second World War.

He was serving as an aide to a Chaplin when the Chaplin was killed, and Billy found himself and three other Americans lost deep in German territory.

Eventually, in Dresdon, Billy and other prisoners of war were housed in building number five, which had previously been used for the slaughter of livestock.

Slaughterhouse-Five is the story of Billy's life as a soldier, an optometrist, a husband and father.  But most of all, as a POW, and a survivor of the fire-bombing of Dresdon.

Throughout the book, Billy 'time-travels' (he believes) forward and backward in time to various events in his life.  He also believes he travels to a place called Tralfamadore, where he is kept in a zoo as a "human exhibit".

This is one of the most often censored books.  Just about every complaint used by people who attempt to ban a book has been used to describe this one: Obscenity, vulgar language, violence, ungodliness, immoral subject matter, cruelty, unpatriotic, "contains and makes references to religious matters", and that it is a "degradation of the person of Christ".

And that's just a partial list.  This year, 2011, it is banned in Republic, MO, along with Twenty Boy Summer.  A local resident, Wesley Scroggins, complained that the books "teach ideas contrary to the Bible".

He also tergeted Laurie Halse Anderson's Speak , but the school board voted to keep that one on the shelves.

The Kurt Vonnegut Memorial Library said they would ship copies of Slaughterhouse-Five to families in Republic who ask for them.

Apparently, Scroggins thinks everyone should read only what he considers acceptable, according to his religious beliefs.

I personally believe that high school students who wants to read this book should have access to it.  They are certainly old enough to read about war, since some of them are old enough to go to war, and the rest are close to it.

Return from Slaughterhouse-Five to favorite-banned-books.com