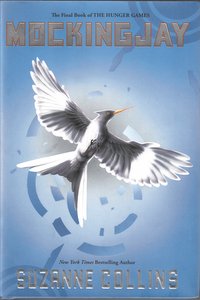 Mockingjay (2010) is Suzanne Collins' final book of The Hunger Games. It begins with Katniss making a visit to what's left of District 12. And it's not much.

It was bombed immediately when the Quarter Quell was over. As we learned at the very end of Catching Fire, District 12 no longer exists.

Katniss had been picked up by a hovercraft and taken to District 13, which does exist, after all. There had been rumors of it, but most believed it had been destroyed years ago.

As Katniss wades through the ashes that was once her home, she discovers that Prim's cat, Buttercup, has somehow managed to survive.  Katniss rescues him, plus a few mementos: a blue ribbon for Prim, her parents' wedding photo, and her father's jacket.

She also finds a white rose from President Snow... a reminder that she is still very much in danger.

Gale had managed to escape District 12 with his family, Katniss' mother, and Prim. They are all safe now in District 13. Living conditions there are much better, but certainly not ideal. Food is still scarce, and everyone lives underground.

Peeta has been captured by the Capitol. Katniss doesn't know what has happened to him. He may be dead, or he could still be alive and being tortured.

Countless people have been killed. A revolution is in progress. In fact, it has been for some time, and Katniss has unknowingly been a part of it all along.  That explains why she had so much help staying alive during the Games.

Now she is being urged to be the Mockingjay - the symbol of the revolution. So far, she has resisted, but when she learns that Peeta is alive and looking well, she agrees - with conditions:

(1) She wants her family to keep Buttercup, Prim's cat.

(2) She wants to hunt in the woods again, and she wants Gale with her.

(3) If they win the war, she wants Peeta pardoned. He is not to be punished at all. She also wants the same for the other two tributes that were captured by the Capitol. And a bit later, she adds Finnick's Annie to the list.

The Hunger Games series ranks #3 on the American Library Association's list of most frequently challenged books of 2011.

They have been labeled "anti-ethnic", "anti-family", and "occult/satanic". Complaints also include "offensive language" and "violence".

I don't understand where most of this criticism is coming from. Except for the violence, of course. There is certainly plenty of that. It's brutal and bloody.

But war always is, isn't it?

Back to The Hunger Games

Return from Mockingjay to favorite-banned-books.com