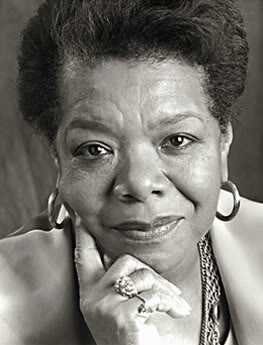 Maya Angelou, born Marguerite Ann Johnson in St. Louis, MO on April 4, 1928, is said to be one of the most often banned authors.

Mostly because of the graphic rape scene in her book,  I Know Why the Caged Bird Sings.

This wise and wonderful woman, strong and brave, poet, author, civil rights activist, was nominated for a Pulitzer Prize for her poetry.

She recited her poem, "On the Pulse of Morning" at Bill Clinton's inauguration in 1993.

In 1969, when Caged Bird was published, she was one of the first African American women to be able to talk publicly about her personal life. She was seen as a respected spokesperson for women and blacks.

The story of this person's childhood should not be read? I believe that it should.  Much can be learned from Maya Angelou's books.  I seriously doubt she touches on any subject unfamiliar to junior high and high school students.

But because of numerous complaints from parents, the book has often been removed from library shelves.  It's still one of the most frequently banned books from junior high and high school libraries.

Parents should be able to choose what their young children read, of course. But not what other people's children read!

In this book, she shows us great strength and determination, and courage to rise above the worst of circumstances.

I highly recommend reading--or re-reading  I Know Why The Caged Bird Sings.

Return from Maya Angelou to favorite-banned-books.com