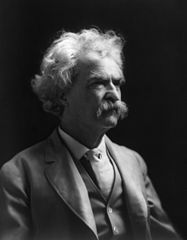 Was Mark Twain a racist?

He was four years old when his family moved to Hannibal, Missouri, on the Mississippi River.

Missouri was a slave state at the time, and his family owned slaves. Summers were spent at his uncle's farm in Florida, Missouri, where he listened to the stories of the adult slaves, and played with their children.

He considered them his friends, but they really couldn't be in the truest sense of the word. Both he and they were aware of lines not to be crossed.

But in his story of Huckleberry Finn, that line is crossed...

It's been much debated whether or not he was a racist. I seriously doubt there's a clear "yes" or "no" answer.

Certainly, he would have been influenced to some extent by the time and place in which he lived. He must have absorbed at least some of the attitudes and beliefs, perhaps without even being conscious of it.

Yes, he used the n-word in his book. I see that as simply using the language of the time.

To me, the story itself says that in his heart, he is not a racist. If he was, would he write a story in which a white person lives with and protects a runaway slave?

And when the time comes to choose between what the world has taught him is "right", and therefore betraying Jim, he chooses to stick by Jim, even if he "goes to hell" for it.

Would a racist end the story that way? I don't think so. Anyway, that's the way I see it.

Back to Huckleberry Finn

Return from Mark Twain to favorite-banned-books.com