Did Adam have a wife named Lilith before God created Eve?  According to ancient texts that never made it into the Bible, the answer is "yes".

I've heard preachers, while railing against homosexuality, make the comment that it's "Adam and Eve", not "Adam and Steve"!  Maybe, in the beginning, it was neither. Try "Adam and Lilith".

Her story can be found in the Zohar and in the Alphabet of Ben Sira, a collection of writings from the middle ages. According to this tradition, she was created from the dust of the ground, as was Adam, in the "image and likeness of God", and equal to Adam.

Adam was not at all pleased with this arrangement. He couldn't get her to obey him. She refused to be submissive. She insisted on equality, which he would not tolerate. 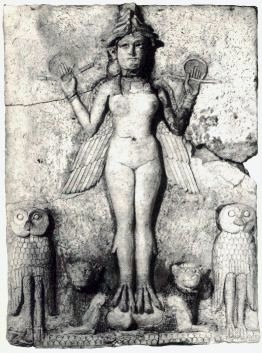 Lilith then decided she would pronounce the four Hebrew letters spelling the name of God, which were forbidden to ever be uttered.  It is said that when she spoke the divine name of God, it gave her such power that she 'flew into the heavens'.

Three angels were sent to bring her back.  According to the Alphabet of Ben Sira, God said that if she agreed to come back, that would be good, but if she didn't, she must "permit one hundred of her children to die".

She would not agree, and was cast out of the garden.

Lilith took revenge on the children of Adam and Eve.

Since she had defied both Adam and God, she is now a demon, and greatly feared by pregnant women and mothers of young children.

She is blamed for miscarriages and the deaths of babies, which were frequent in those days.

This is a story I never heard in Sunday School! It was always about Adam and Eve. And how it was Eve's fault (of course) that they were both booted out of Paradise.

Although the name Lilith does not appear in any of my Bibles, there are two very different stories in Genesis having to do with the creation of a woman for Adam.

In Chapter Two, (King James Version) we have the story we are most familiar with. Genesis 2:7 tells us, "And the Lord God formed man of the dust of the ground, and breathed into his nostrils the breath of life; and man became a living soul".

In verse 18, we read "And the Lord God said, It is not good that the man should be alone; I will make him an help meet for him."  Verse 19 tells us that God created - also out of the ground - every beast and fowl, and brought them to Adam for him to name.

Verse 20: "And Adam gave names to all cattle, and to the fowl of the air, and to every beast of the field; but for Adam there was not found an help meet for him."  (They were looking among the cattle, fowl, and beasts?? Okay, maybe that's another story.)

In verses 21 and 22 we read how God caused Adam to sleep while he took a rib from him and made a woman, Eve.

It seems Adam was happy with this woman, because in verse 23 he says "This is now bone of my bone and flesh of my flesh: she shall be called Woman, because she was taken out of Man".

Presumably, since she was taken from him, he was allowed to rule over her and she was obliged to obey.

What does Adam mean? Was there a time when a human female was not 'bone of his bone'?

Yes, indeed! Right back there in Chapter One. Day five of Creation.  In verse 26 we read this: "And God said, Let us make man in our image, after our likeness: and let them have dominion over the fowl of the air, and over the cattle, and over all the earth, and over every creeping thing that creepeth upon the earth."

Some scholars believe this female was Lilith.

Back to Banned from the Bible

Return from Lilith to favorite-banned-books.com