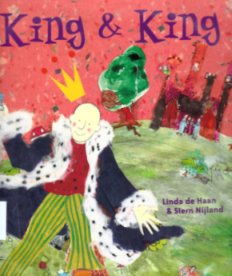 King & King is a young children's picture book by Linda de Haan and Stern Nijland that was originally written in Dutch.  It was later translated into English, and published in the United States in 2002.

This little fairy tale is about a prince whose mother is tired of ruling, and determines that her son will marry and become king by the end of the summer.

She reminds him that every other prince in the area is already married.  Finally, at her insistence, the prince agrees to marry, though he tells her he has never been fond of princesses.

The word is sent out, and princesses arrive from far and near, but the prince is not attracted to any of them.

The final princess, Madeleine, was accompanied by her brother, Prince Lee, and the prince promptly falls in love with him.

They are married, and are now known as King and King.

The prince's page falls in love with the princess from Greenland, the queen now has time for herself, and the prince has found his true love. 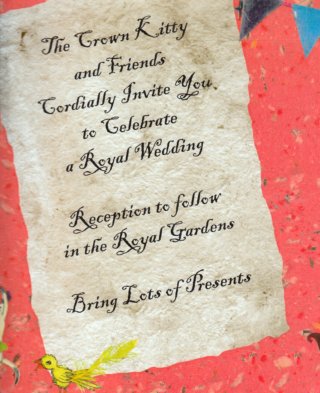 Everyone, that is, except social conservatives, who are terribly upset by all this love and happiness.  They want to "protect" the children - not just their children - but every child from what they call "adult material".

This adorable (in my opinion) little book caused such a commotion that King & King landed in the Top 10 list of the American Library Association's most-challenged books in 2004.

Several states called for it to be restricted to the adult section in libraries.

In Massachusetts, parents sued a school district in 2006, after a teacher read the book to a second grade class.


Return from King & King to favorite-banned-books.com