James And The Giant Peach 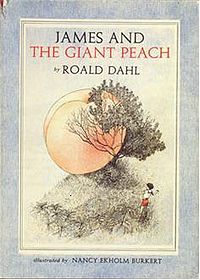 Roald Dahl's 1961 book, James and the Giant Peach, is the story of James Henry Trotter's journey inside a huge peach with his giant insect friends.

James is four years old, and is a happy little boy living with his mother and father in a house by the sea in the south of England. That is, until one day when his parents go shopping in London, and are killed by a large animal.

His lovely home is sold, and James is sent to live with two terrible aunts, Aunt Sponge and Aunt Spiker. They are both mean to him. They call him awful names, and beat him for almost no reason at all.

He is not allowed to leave the hill where they live. The Aunts don't take him anywhere. They don't let him play with other children. He doesn't even have a dog or a cat for company.

He sleeps on a bed of boards, and often does not have enough to eat.

One day, when he has been there for about three years, Aunt Sponge and Aunt Spiker are sipping cold drinks and watching James chop wood. James is tired, hot, and hungry. When he slows down a bit, the aunts threaten to beat him.

James begins to cry, and runs to the far end of the garden. There he comes across a mysterious old man, who, somehow, knows all about James and how unhappy he is.

The old man gives James a bag of tiny green things that look like stones or crystals - and they are moving around with power and magic!

He tells James if he will mix them with water, and ten hairs from his own head, he will have a magic potion. He says that if James drinks it, he will have great adventures and will be happy again.

The old man cautions James to be very careful to not let the little green things get away. If they do, he says, they will work their magic on someone else.

"Be it bug, insect, animal, or tree", that will be what gets the full power of the magic, he tells him.

James is running back to the house to get water for the potion, when his foot slips, and he falls. The bag breaks open and all the little green things quickly sink into the soil.

He falls right by a peach tree that had never had fruit on it. But now, it begins to bloom, and before long, it has a peach on it that grows and grows until it's the size of a house!

James discovers a tunnel that goes through the flesh of the peach to the hollow stone at the center. He finds a door, opens it, and goes inside.

It's there that he meets a grasshopper, a spider, a ladybug, a centipede, an earthworm, a silkworm, and a glow-worm - all as big as he is!

They tell James they have been waiting for him. They all want to escape as much as he does. He soon becomes friends with them. The centipede bites through the peach stem, and they are on their way!

James and the Giant Peach tells of their adventures and challenges as they roll down the hill, flattening everything in their path, including the terrible aunts, Spiker and Sponge.

They roll all the way down to the water, float across the ocean, all the way to New York City.

But they have many narrow escapes along the way!

James and the Giant Peach is frequently banned and/or challenged for various reasons. Among complaints are: inappropriate language, encourages disobedience to parents, references to drugs and alcohol, and because it contains "magical elements".

Some object because it is too "scary", referring to the abuse of James, and the deaths of the aunts.


Return from James and the Giant Peach to favorite-banned-books.com