In The Night Kitchen 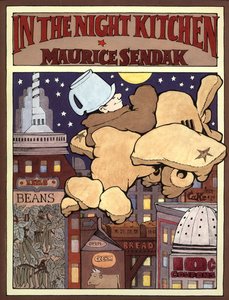 In Maurice Sendak's 1970 picture book, In The Night Kitchen, Mickey is a little boy in his bed trying to sleep, when he hears noises downstairs.

He soon finds himself floating past the floor below where his parents are sleeping.  On and on he goes, down to the "Night Kitchen", and on the way, he floats right out of his pajamas!

In the Night Kitchen, three bakers are stirring batter for "morning cake".

Mickey lands in it.  He's completely covered with batter, and nearly gets put into the oven.

He escapes just in time, makes an airplane out of dough, and flies away to get milk for the cake.

In the morning, he finds himself back in his bed, and all is normal.

According to the American Library Association, this book ranked 25th on "100 Most Frequently Challenged Books of 1990-2000."

It has also been listed in the "15 Most Controversial Picture Books".  Most of the fuss about this book is about little Mickey being out of his pajamas.

A few people seem to have gotten rather weird about it. I read a story about a woman drawing blue diapers on Mickey.  Another woman wanted to "get the book out of the house" because it had a naked boy in it.

I hope that woman doesn't have children. If she gets that upset about a drawing in a book of a little boy with no clothes, I have to wonder what she'd do with a real live one!

Every little kid I've ever known loved to run around naked.

Some folks went even further, claiming some really outlandish things. They saw "sexual innuendo" in the book.

Yes.  All that nudity, "milky fluids", and the huge milk bottle they saw as a phallic symbol.

Please.  What three-year-old is going to get that out of this book?  And as for the adults who do - well, I find that a little disturbing.  Okay, maybe more than a little.

Children are not upset about Mickey losing his pajamas, either.  They just love it that he flies off in a plane made of cake dough!

Return from In The Night Kitchen to favorite-banned-books.com