I Know Why The Caged Bird Sings

I Know Why The Caged Bird Sings covers Maya Angelou's life from age three to seventeen.

Her parents separated when she was three years old and her brother was four. At that time, their father put them on a train and sent them to his mother in Stamps, Arkansas.

They lived there with their grandmother and an uncle, until their father returned unexpectedly four years later, and took them back to their mother in St. Louis, Missouri.

It was there that Maya was sexually abused and raped by her mother's boyfriend at the age of eight.

The rape scene is what seems to be most often mentioned as a reason for challenging the book.  However, several other things have been mentioned as well, "offensive language", "anti-white", and "unsuited to age group" among them. 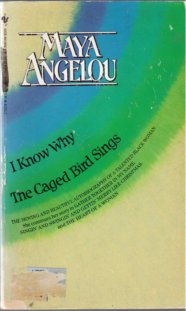 I don't pretend to know at what age this book could - or should - be read. I think that depends on how it is presented, for one thing. Will it be read with a teacher or parent? Will it be discussed as they read?

Much can be learned from this book about what life was like for a young black girl growing up in the south in the thirties and forties.

In fact, much can be learned about growing up. Period.  I have to wonder, if by trying to keep our young people innocent as long as possible, are we instead keeping them ignorant?

I'm thinking of all the stories I hear about drugs in Middle School, young girls giving oral sex freely, and saying, "It's no big deal".

Maybe a properly supervised discussion of what has, can, and does happen growing up is in order.

Back to Maya Angelou

Return from I Know Why The Caged Bird Sings to favorite-banned-books.com