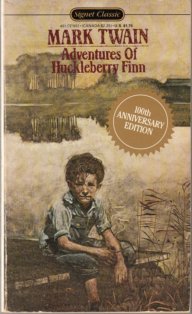 Huckleberry Finn topped the list of my favorite banned books when I was a kid. Mostly because Huck befriends Jim, the runaway slave.

Can anyone who's read this book keep from cheering as Huck helps Jim to freedom?  I don't know how old I was when I first read it, only that I was very young. Over the years, I forgot most of the details.

What did stay with me was that he helped Jim, the runaway slave. To me, that is more important than many of the reasons this book was banned.

Controversial from the beginning, the Public Library in Concord, Massachusetts, called it "trash", and banned it in 1885.

In 1902, the Denver, Colorado Public Library banned it as well.  Many objected to the street language Huck and Jim used, and what critics referred to as their "coarse behavior".

In the United States, the uproar over the book quieted down for about fifty years, and it became a classic.

Then in 1957, the National Association for the Advancement of Colored People demanded it be removed from New York City high schools, citing racism.  Most challenges in more recent years have to do with the use of the n-word.

To me, there is a clear anti-slavery message in this book, and that's why I love it. Helping Jim was a noble act, and made Huck Finn a hero in my eyes.

Never mind he was dirty, uneducated, and couldn't seem to "behave himself". Seems to me he can be excused for a lot of that! After all, he was a homeless kid. His only relative was a father who was an abusive drunk.

He was so used to being on his own, that when the Widow Douglas takes him in, and tries to teach him a "proper" way of living, he can barely tolerate the change.

His father finds him there, takes him to a cabin in the woods and keeps him locked up, until Huck finds a way to escape.  He fakes his own death, and runs away.

Huck is staying on an island where he thinks he is alone, but soon finds that Jim is hiding there as well.  Jim belonged to the Widow Douglas' sister, Miss Watson.

Jim has heard of Huck's "murder", and thinks Huck is a ghost when he first sees him. I invite you to take a trip back in history, and re-read "Adventures of Huckleberry Finn" by Mark Twain. 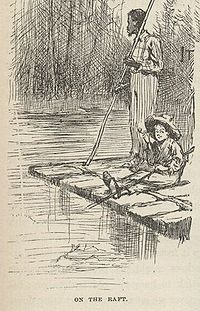 Should Huckleberry Finn be re-written to exclude the offensive "n" word?

According to Publishers Weekly, NewSouth Books and Mark Twain scholar Alan Gribben plan to do just that.

Gribben's reasoning for making the change is the frequent challenges and bans because of that one word, causes many children to miss out on the entire book. He feels that by replacing the "n" word with "slave", it will be available to more - and younger - children.

I see his point, but personally feel the book should not be changed. That particular word is there for a reason.  It's a word that was widely used in those days.

It's a part of our history. As ugly as it is, facts cannot be changed by removing words from a book.  Let's let it stand the way it is.

Does changing it mean that we are at liberty to re-write any and all books that contain words not to our liking?  It makes me wonder how many have already been changed that we don't know about.

Back to Book Banning

Back to Banned Books


Return from Huckleberry Finn to favorite-banned-books.com

Have An Opinion About This?

What are your thoughts on changing the "n" word to "slave"? Share them here!