Ah! What a stir  J K Rowling's Harry Potter books caused when they came to town!  People all across the country (certainly where I live!) were determined to keep them off library shelves.

In newspaper articles and letters to the editor, people argued against-and for-the Potter books. One letter warned that if you buy these books for your kids, you just may be "buying them their ticket to hell".

Many people seemed terrified of them. They talked as if they believe if their kids read them, they will immediately begin to whip up magic potions that will actually work. 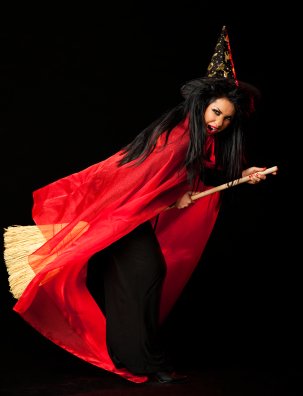 And next, maybe they'll start putting curses on people they don't like, and flying around on broomsticks. Most complaints I've heard and read about come from fundamentalist Christians.

They claim to actually believe that reading these books, (as well as many, many others!) is dangerous.  It's sad, really, to be so afraid of reading a book.

All Christians, of course, do not fall into this category. Some actually support the books.  One woman said she read them, and that there was "more to them than wizards".

She went on to say that too often people simply take another person's word rather than reading the book themselves.

I know this to be true from personal experience. They hate it, they fear it, it's evil, (whatever "it" may be) yet they don't have a clue what "it" is really about.

Complaints most often listed in attempts to ban the Harry Potter books are that they promote witchcraft, the occult, and evil. Some add that they are disrespectful to adults.

In spite of all the fuss, the books remain much-read and much-loved.

If these books teach what Harry and his friends are learning at Hogwarts, then considering how many kids have read them, and watched the movies, wouldn't it be reasonable to expect to see at least a few young people flying on their brooms by now?

And speaking of flying brooms, that would be altogether different from a flying sleigh and reindeer, right?

Just asking. One wouldn't want to think Santa is a wizard. 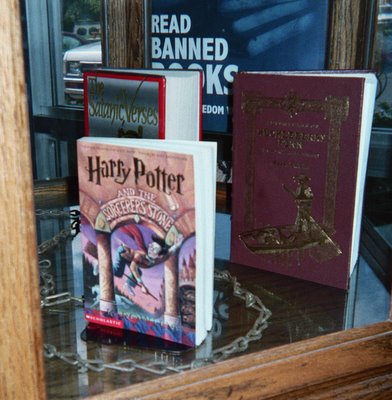 Back to Book Banning

Return from Harry Potter to favorite-banned-books.com