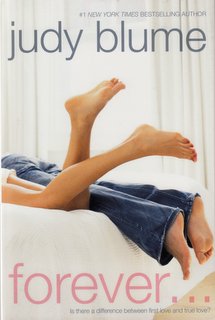 Forever, written by Judy Blume in the mid-seventies, is a story of first love.

Katherine and Michael meet briefly at a New Year's Eve party, and very soon after, they are spending every possible moment together.

They are both seventeen and seniors in high school.

As their relationship heats up, they have serious decisions to make about sex - and commitment.  They are sure their love will last, and begin making plans for their future.

But their parents have different ideas about what Katherine and Michael will be doing with their time away from school.

Katherine's father gets her a job as an assistant tennis counselor at the camp where her little sister, Jamie, will be going for the summer.

Katherine is eighteen by now, and at first tells her father she won't go, but decides later that she can't disobey her parents.

When she tells Michael, he confesses that he, too, will be leaving. His uncle in North Carolina has offered him a good-paying job in his lumber yard for the summer.

Will their love survive the separation and their new circumstances?

Frequently challenged and/or banned due to strong sexual references, some people go so far as to claim it's pornographic, and unfit to be read by young girls.

This results in most schools removing the book from at least their intermediate libraries.

It does have 'strong sexual references'.  No denying that.  But these are exactly the kinds of things young people hear about, experience, and make decisions about every day.

This story could be very helpful in sorting these things out.  It touches on the issues of teen pregnancy, casual sex, venereal disease, and struggling with sexual identity.

There is also useful information about Planned Parenthood.

Return from Forever to favorite-banned-books.com