Fahrenheit 451. The temperature at which book paper bursts into flames.

This story by Ray Bradbury is about a fireman named Guy Montag.  Not a fireman who puts out fires, but one who starts them. And it's kerosene, not water, that gushes from the giant hoses.

Montag enjoys his job. At first. He lives in a society in which books are illegal.  People entertain themselves with entire walls in their parlors that are huge television screens.

They consider the characters that play on their walls their family members. Human relationships are very superficial.

The call that summons the firemen is a report that someone has been found with books. When they arrive at the reported address, the books are burned, along with the entire house.

Montag's fire captain had explained that books cause people to think too much. That causes confusion. Some people don't like one thing, others something else. So, if all books are destroyed, the conflicting ideas go with them. Everyone is happy!

But, from time to time, Montag has been secretly rescuing a book or two from some of the houses where they had gone to burn.

He begins to become dissatisfied with life as he knows it.  Soon after, a couple of out-of-the-ordinary events push him even further in that direction.

One day, at the fire station, a call comes in. All the firemen jump on the huge truck with its load of kerosene as usual, and speed off into the night.  It comes to a halt directly in front of Montag's house.

This is a chilling story. But one that could never happen in real life. 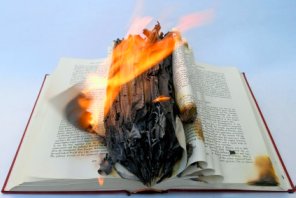 Fahrenheit 451 was taken off the required reading list at West Marion High School in Foxworth, Mississippi, in 1998.

A parent complained about the use of the words "God damn", which resulted in the superintendent having the teacher remove the book from the list.

I find the banning of this book especially ironic, since the story is about censorship and about people who ban books for fear of too much free thought!

I also find it disturbing that one parent was able to make that decision for all of the other students and their parents.

Return from Fahrenheit 451 to favorite-banned-books.com