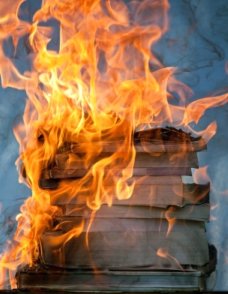 Seems there are a lot of people who believe that freedom of religion should apply only to their religion.

Rev. Jones, pastor of the charismatic non-denominational church in Gainesville, Florida, is letting the world know that "Islam is of the devil".  He has announced that Korans will be burned on the church grounds on September 11, 2010, between 6:00 and 9:00 p.m.

"Islam is of the Devil" is the name of a book written by Jones. He also sells t-shirts and coffee mugs with this logo.

There is an "Islam is of the Devil" sign in front of his church that has caused him trouble locally. Now that news of his planned bonfire has gone global, things have taken a serious turn for the worse.

He may be getting more attention than he anticipated. But maybe not. One would think he would know that doing something like this would cause big problems.

Is it possible he doesn't fully understand the likely consequences of his actions? Does he just not care?

The Gainesville Fire Department has refused him a permit, but Jones says the burning will be held as planned anyway.

The police and FBI are now involved, as he is regularly getting death threats. Jones is carrying a gun.

I wonder if he has thought about all the people who are now in potential danger because of his outrageous behavior.

Back to Book Burning