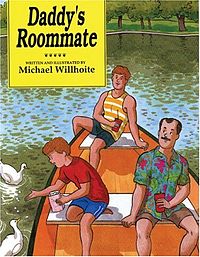 Daddy's Roommate is a 1990 children's picture book by Michael Willhoite. It is the story of a little boy whose parents are divorced, and his daddy now lives with another man.

This child says his mother told him that Daddy and Frank are gay, but he doesn't know what that means.  She tells him that being gay is just another kind of love.

He stays with Daddy and Frank on weekends. He says that Frank likes him, and just like Daddy, Frank tells him jokes and riddles, reads to him, helps him catch bugs, and "makes great peanut butter and jelly sandwiches".

They all have fun going to ball games, the zoo, and the beach.

He says Daddy and his roommate are very happy and that he is happy, too.

Daddy's Roommate was challenged in Florida in 1998 at the Brevard County Library and the Hays, Kansas,  Public Library because of the book's "teaching of the homosexual lifestyle as another way to show love".

When an attempt to ban the book failed in Wichita Fallls, Texas, the person who wanted it banned kept it checked out for a year, keeping it from other patrons. Deacons of the First Baptist Church requested that any literature promoting or sanctioning  a homosexual lifestyle be removed.

A New York Times story in 2008 reported that Sarah Palin complained about Daddy's Roommate, saying that
it didn't belong in the Wasilla Public Library, but she didn't succeed in getting it removed.

Return from Daddy's Roommate to favorite-banned-books.com