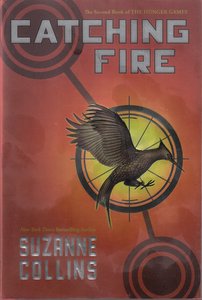 Catching Fire (2009), the second book in The Hunger Games trilogy, by Suzanne Collins, begins with Katniss dreading the Victory Tour.

She is in the woods, but without Gale. Things have changed. He is now working 12 hours a day in the mines. Katniss still hunts to help feed Gale's mother, two brothers and little sister.

Katniss and Peeta are both somehow miraculously still alive; they have won the Hunger Games.  Katniss now has plenty of money to feed her family and Gale's, but he won't take money from her.  He doesn't want to accept the game she kills in the woods, either, but she tells him she'll go crazy if she doesn't hunt.

Gale still hunts with her on Sunday, his only day out of the mines. But it's not the same. Katniss and Peeta have presented themselves as lovers during the Games.  Peeta is not pretending. It's real for him. Katniss isn't sure what it is for her, but it has made a difference in her relationship with Gale.

It's illegal to hunt, and when Gale gets beaten nearly to death when he's caught with a wild turkey, Katniss begins to see things from his point of view.  He has been taken to Katniss' home, to be treated by her mother. When she has cleaned and dressed his wounds as best she can, and has given him pain medicine, she leaves Katniss to watch over him.

While Gale sleeps, Katniss begins to wonder how she would feel if their situations had been reversed. What if Gale had gone to the Hunger Games and she had stayed home? What if she had to watch his public love affair with another girl?  Just the thought of it makes her furious! But it's useless to dwell on such things. Besides, both Gale and Peeta are pretty much ignoring her now.

Anyway, she has more important things to think about. Even though she has managed to stay alive, and keep
Peeta alive, as well, she has angered the Capitol. There are rumors of uprisings in several districts

She is at home in District 12 with her mother and her sister, and they are safe for the moment. But for how long?

President Snow has made it plain enough that they are all in danger. Katniss knows it's only a matter of time until he will have his revenge, but what form will it take? Who among her loved ones will suffer for it? Already Gale has nearly been killed. What's next?

As it turns out, it is something she could never have imagined.

Every twenty-five years, the Capitol holds what they call the "Quarter Quells". As a reminder, says President Snow, "to the rebels that their children were dying because of their choice to initiate violence".

For this, their third Quarter Quell, the male and female tributes will be chosen from the existing victors.  The unthinkable has happened. Katniss is going back into the arena.

She is the only living female victor from District 12. Peeta will be going back, as well. He and Haymitch are the only males. And Katniss knows that if Haymitch is chosen, Peeta will volunteer to take his place.

Catching Fire, the second book in the Hunger Games trilogy, is the story of the Quarter Quell Games.

The horror of being forced to kill or be killed is something most of us (thankfully!) never have to face, and can hardly imagine.  Only those who go to war know the reality of such things.

Catching Fire, along with The Hunger Games and Mockingjay have been labeled "anti-ethnic", "anti-family", and "occult/satanic".  Complaints also include "offensive language" and "violence".

The series ranks #3 on the American Library Association's list of most frequently challenged books of 2011.

I don't understand any of those complaints except for the violence, of course. I don't remember any offensive language, and I really don't get all the "anti" stuff!

Back to The Hunger Games

Return from Catching Fire to favorite-banned-books.com