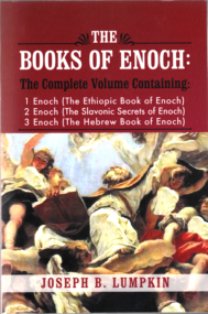 References to Enoch can be found in the Bible, yet there is no such book included.

There are actually three. This page refers to the Ethiopic Book of Enoch.

It seems to have been widely read, yet was not included in the official Christian canon.

It was lost for centuries until found in Ethiopia in 1773. The Ethiopian Church had preserved it, put in right in with the other books of the Bible, and had been using it all along.

It was first thought to have been written after the beginning of Christianity, but after other copies of the book were found among the Dead Sea Scrolls, it was evident that it had existed before the time of Jesus.

It is written in the first person, and describes Enoch's visions when he was "caught up" and given a tour of Heaven by an angel.

Much of it is familiar material. It speaks of angels coming to earth and mating with the daughters of men, and producing giants.  The story of Noah and the flood, the cleansing of the earth, hell, judgment, and the coming Savior are all there.

It seem clear that it was popular, and considered scripture by a lot of the early Christians.

It was banned in the fourth century at the Council of Laodicea, probably because of controversy about the fallen angels.

Back to Banned from the Bible

Return from Book of Enoch to favorite-banned-books.com