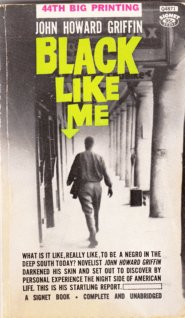 Black Like Me is the non-fiction account of author John Howard Griffin, who darkened his skin and traveled to the deep south to find out what life was really like for a black person in 1959.

In early November of that year, this white author began living as a black man.  This is his story.

John Howard Griffin is a white man living in Texas in 1959, and committed to racial justice.  But he knows that because he is white, he can never really know the plight of a black individual.  He decides to become black for a time, so that he can better understand.

He takes his idea to an old friend, George Levitan, the owner of Sepia, an internationally distributed Negro magazine.

After telling him what a crazy idea it is, and that he'll probably get himself killed, Mr. Levitan agrees to finance the project. In return, he will get articles for Sepia.

Mr. Griffin travels to New Orleans, and with the help of a medical doctor he begins the process of darkening his skin.  When this is completed, he shaves his head, and walks into the world as a black man.

He knows, of course, the he will find prejudice and unfavorable conditions, but he is astounded at the extent of it.  There are difficulties, "hate stares", and insults everywhere.

He goes to places he'd visited only days before as a white man, and is shocked at the difference in the way he is treated.  People who were kind and accommodating when he was white, were now visibly filled with animosity toward him.

He finds a friend in a shoeshine man named Sterling Williams. Mr. Williams had shined his shoes when he was white. He goes back to him as a black man, and Mr. Williams doesn't recognize him.

He does remember shining the same shoes before, and Mr. Griffin tells him he is the same man.

Sterling Williams immediately accepts him as one of them, and is a great help to him from then on, educating him in the "proper behavior" of a black man toward whites, directs him to places where he can eat, and to restrooms blacks can use. 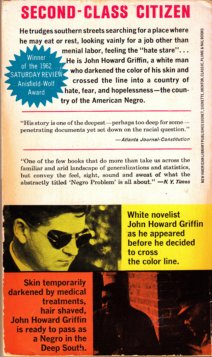 He was never physically hurt, but endured all sorts of insults many times every day.  Simply finding a place to get water and food, or a restroom he could use was a daily chore.

Some stores would allow him to buy something, but would still refuse him a drink of water or allow him to use a restroom.

When he returns to his hometown, a white man once again, he is hanged in effigy when the news of what he has done becomes known.  He and his family finally escape to Mexico to get away from the threats of racist whites.

"Vulgarity" and "obscenity" were given as reasons for banning this book.

In 1967, an Arizona school removed the book citing "four-letter-words".

A challenge in Wisconsin and Pennsylvania was denied in 1977.

As late as 1982, a school in Missouri placed the book on a closed shelf because a parent complained that it was vulgar and obscene and "because of black people being in the book". (!!!)

Black Like Me was made into a movie in 1964. John Howard Griffin was played by James Whitmore.

I saw the movie many years ago in Peoria, Illinois, - with a guy from Tennessee. It turned out that wasn't such a good idea. We argued all through the movie.

He kept insisting that "it wasn't that way", all the while telling me stories of what he had seen that showed that it certainly was.

I highly recommend Black Like Me, both the movie and the book. I believe it should be studied and discussed. It was "that way" - and worse. Let's don't try to hide the facts.

Have your say about what you just read! Leave me a comment in the box below.