Annie on My Mind 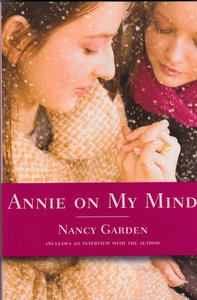 Nancy Garden's 1982 novel, Annie on My Mind, is the story of two teenage girls, Liza Winthrop and Annie Kenyon, who meet and fall in love.

The story is told by Liza, who lives in an up-scale neighborhood with her parents and younger brother, and attends a private school, Foster Academy.  Liza hopes to become an architect.

On a rainy Sunday in November, Liza goes to the Metropolitan Museum of Art, where she sees Annie for the first time. Liza decides to visit the American Wing first, as it is usually less crowded.  As she walks toward the colonial room, she hears singing.

She walks into a room to find the source of this wonderful sound - a girl about her age sitting in a window looking outside as she sings.

The girl is startled when she realizes someone else is in the room, and stops singing.  Liza tells her to continue, that it is beautiful.

She likes this girl, and after a bit of conversation, Annie accompanies Liza on her tour of the museum. When they leave to go home they exchange addresses and phone numbers.  Liza feels that something important has just happened.

Annie comes from a much different background than Liza's.  Annie goes to public school, lives with her mother, father, and grandmother in a lower-income part of Brooklyn. She wants to be a singer, and hopes to attend the University of California.

In spite of the differences in where and how they grew up, Liza and Annie become friends almost immediately, and soon they are more than friends.

Annie on My Mind is the story of them falling in love, and how Liza deals with her feelings, as well as the reactions of family and friends as they learn the truth of her relationship with Annie.

According to the American Library Association, Annie on My Mind was number forty-eight on the top 100 most frequently challenged books from 1990 to 2000.

Most notable was what happened in Kansas City in 1993, eleven years after the book was published. The LGBT organization Project 21 donated copies to forty-two schools in the area, in both Kansas and Missouri. This led to much controversy, due to the homosexual theme of the book. Some parents were upset that it was made available to high school students.

All the talk and anger about the book escalated to the point that it was burned on the steps of the Kansas City School Board building.

In December of 1993, the superintendent of the Olathe, Kansas school district ordered the book removed from the high school library, in an attempt to "avoid controversy".

As a result of this action, the American Civil Liberties Union, along with a teacher and several families, sued the school district for removing the book.

The case went to trial in September of 1995. In November of that year, it was ruled that the book's removal was an unconstitutional attempt to "prescribe what shall be orthodox in politics, nationalism, religion, or matters of opinion".

On December 29, 1999, the school district announced it would not appeal the court's decision, and restored Annie on My Mind to library shelves.

I think it's appalling that the only reason (that I know of) this book was burned/banned is because it's a love story between two young people of the same sex.

It's a perfectly sweet book about two young people falling in love. And it was taken from a high school library!  Are there people who actually think high school kids don't know anything about this subject?

This book needs to be available to all. It will let gay kids know they are not alone, and it could help straight kids better understand that gay people are not all that different from themselves.

Return from Annie on My Mind to favorite-banned-books.com