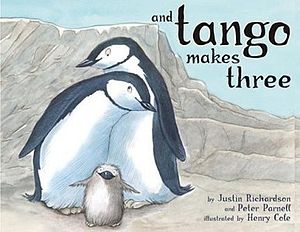 And Tango Makes Three, written by Justin Richardson and Peter Parnell, and illustrated by Henry Cole, is a children's picture book about two male penguins that hatch and raise a baby penguin. This 2000 book is a true story that happened in the Central Park zoo in New York City.

Roy and Silo live together in the penguin house with all the other penguin families. They did everything together.

They watched as the other couples took turns sitting on an egg, keeping it warm, until a baby penguin
broke out of the shell. But Roy and Silo had no egg to sit on; no baby to feed and love.

One day Roy found something that looked like an egg, but was really a rock. He brought it home, and he and Silo took turns sitting on it, like they saw the other penguin couples do. But, of course, nothing happened.

Their keeper, Mr. Gramzay, had been watching them, and when he found an egg that needed to be cared for, he put it in their nest.

Roy and Silo took good care of their egg. They took turns sitting on it and keeping it warm.

This time, something did happen! One day they heard peeping sounds. A hole appeared in the egg shell, and soon Roy and Silo had their very own baby!

Mr. Gramzay named her Tango, "because it takes two to make a Tango".

And Tango Makes Three is not a made-up story. This actually happened. On the last page of the book is an "Author's Note" which states that all of the events in the story are true.

I think it's a beautiful, heart-warming story. It's also a wonderful way to introduce young children to the idea that all families are not alike, and that is okay.

As long as babies - animal or human - are cared for and loved, that is what's important.

Not everyone sees it that way. There have been numerous attempts to remove this book from school and public libraries.

The book was said to be "unsuited to age group". People also objected to "religious viewpoint", and
"homosexuality".

It has been right in the middle of culture war arguments about same-sex marriage, adoption, and homosexuality in animals.

Believing it exists in the animal kingdom doesn't fit with the idea that it is a "lifestyle choice", so people who think that way deny that there is such a thing as homosexuality. Period.

Return from And Tango Makes Three to favorite-banned-books.com